This Tuesday Will Never Lose Its Appetite

Here’s the skinny on “Fat Tuesday.”

Considering the American epicenter for Mardi Gras is New Orleans, LA (more specifically the French Quarter and Bourbon Street), it’s no surprise that this celebratory occasion is overshadowed by epic parades, bead throwing and a few, low-key parties.

I also hear there is mild consumption of alcoholic beverages during Mardi Gras in New Orleans.

While there is certainly an appeal for this signature celebratory style in New Orleans, LA for certain age groups and individuals, we would be doing ourselves a disservice if we did not take the time to remind ourselves and appreciate the inspiration and motivation behind Mardi Gras and the day known as “Fat Tuesday.”

Bonus: You can read this blog post and watch this video while eating your King Cake, searching for the coveted miniature baby doll.

Continuing a tradition, I will once again give up the letter “Z” for Lent.

Happy Monday (Or Is It Happy Tuesday?)

So, the movie that should have won and that people wanted to win (La La Land) lost to a movie that most people had, quite frankly, not even seen or barely knew about (Moonlight).

My yearly analysis for Oscar winners and losers is that the Academy is right when they’re right and wrong when they’re wrong. Sure, that seems like common sense, but there’s more to it that presumed simplicity.

For example, the Academy was right to award Titanic the golden statue for best picture many moons ago and it was right to award Sandra Bullock the golden statue for best actress for her leading role in The Blind Side in 2010. Conversely, the Academy was wrong to award Slumdog Millionaire the best picture in 2009 and not even nominate The Dark Knight. Heath Ledger deservedly won a posthumous Oscar for his role as the Joker in The Dark Knight for one of the greatest acting performances in cinematic history, but the film as a whole is a revelation and a masterpiece and it was wrongly shafted and stripped of its Oscar moment for the film’s team and Batman fans everywhere.

Last night, the Academy was clearly wrong in fumbling the announcement for Best Picture. However, the Academy was right to clarify this mistake in real-time. As a result, the 89th Oscars will be defined by that painfully embarrassing moment and help Steve Harvey recover a little bit more quickly.

Random Advice: Maybe don’t hire Warren Beatty and Faye Dunaway as editors of the obituary section of a newspaper.

The Checks (and Balance?) of Precision Craftsmanship

Bottom line: This better be good for Crew SC fans.

Specifically regarding jerseys, Mr. Precourt and Co. have a mixed record. While he and his team designed a fantastic black checkered kit with a great local partner (Barbasol), the same corporate team also (purposefully, if you can believe it) chose to inject the colors from the little known Columbus, OH flag (I barely know it and I was born and raised in Columbus, OH) for a genuinely atrocious soccer kit. To add insult to injury, the team had horrible performances while wearing their Minion kits. Talk about poetic justice. 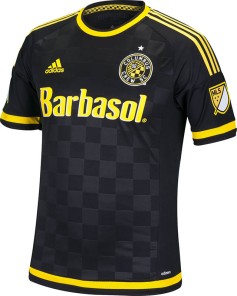 And That Time When Ugly Called Something Else Ugly

(Look at their faces!)

As the Joker would say: “And here we GO…”

The black checkered jersey (seen above) will remain the same, except with the new Acura logo/sponsorship.

At first glance, the v-neck is fine, the State of Ohio flag is a nice addition and the Charter Member #01 is a cool, subtle statement. The new Acura sponsorship is fine (a local connection), but Barbasol was also a worthy local sponsor. Time will tell to see what advertising and marketing campaigns Mr. Precourt and Co. have in mind for promoting Acura as being synonymous with Crew SC specifically and the city of Columbus, OH more broadly.

Acura’s slogan is, “Precision Crafted Performance.” After last season and the 2015 MLS Cup Final, Crew SC was smart to adopt this corporate slogan…and hopefully as a coaching strategy?

Returning back to the new 2017 kits, for some reason, the black and gold checkered pattern is tripping me up because while it’s a great design (I actually won an award for using that precise color scheme and design for/inside a headline in my high school’s yearbook), the placement seems…awkward. It’s unclear at the moment as to whether the checkered pattern’s placement balances the rest of the jersey, kit and complementary design elements.

Still, kudos for incorporating the checkered pattern into Crew SC’s famous “banana kits.” However, until the full kit (shorts and socks) are revealed, the verdict on the 2017 “banana kits” will remain TBD. The fact that Mr. Precourt and Co. prioritized telling Crew SC’s story through its jersey design does deserve high marks.

Now it’s time to play better soccer on the pitch, trade for Mix Diskerud (among many other necessary personnel changes) and for Mr. Precourt to grow a spine and declare to Los Angeles Football Club that the colors black & gold are officially the MLS property of THE Crew SC.

After all, as he and his team declared with their new 2017 kits, Columbus Crew SC is Charter Member #01.

We’ll discover soon if that truth actually means anything to the front office of Crew SC.

Don’t adjust your eyes, this is a real story from the city of Henryetta, Oklahoma.

“City leaders voted Tuesday to abolish an ordinance on dancing, the Tulsa World reported. The dance ordinance, with a penalty of $25, prohibited dance halls within 500 feet of a church or public school.”
–Associated Press, February 23, 2017

We all know and love Footloose, the 1984 B-movie that featured the premise of a small country town that had banned rock music and dancing. Again, that was the plot for a movie. A movie. To my surprise, and likely the surprise to any individual who discovered this news today, the ordinance in Henryetta, Oklahoma was a real thing…in the year 2017. Thankfully, the city’s leaders voted to rid their town of this nonsensical ordinance.

Perhaps a dance today, a Thursday, is necessary…maybe of the throwback variety?

If high school kids (and adults) of Henryetta, Oklahoma aren’t dancing to “Footloose” by Kenny Loggins tonight and this weekend, I think we’ll all cry a little.

People of Henryetta, you know what to do with those Sunday shoes.