Let’s get to the main event of the night:

Leonardo DiCaprio won his Academy Award for Best Actor for The Revenant. As a favorite among moviegoers from his earliest acting in This Boy’s Life and What’s Eating Gilbert Grape (both 1993), the clock has been running to when he would hold that legacy-defining golden statue. Twenty-three years after the aforementioned films and Leo struck gold.

You could say he’s officially the king of the world (real and imaginary).

Have a Great Week!

We’ve been looking at the world all wrong.

With the weekend here, the time has come to hit the ground running for a memorable couple of days. However, there are so many unknown variables to consider, which begs for the right preparation before venturing out into the wild west of life. We must take full advantage of the things we can control.

How does one accomplish this kind of feat?

Hint: It all starts with a look…

And it ends with a killer dance-off in an abandoned warehouse with a raucous crowd and a fashion icon as the judge.

Nothing Theoretical About It 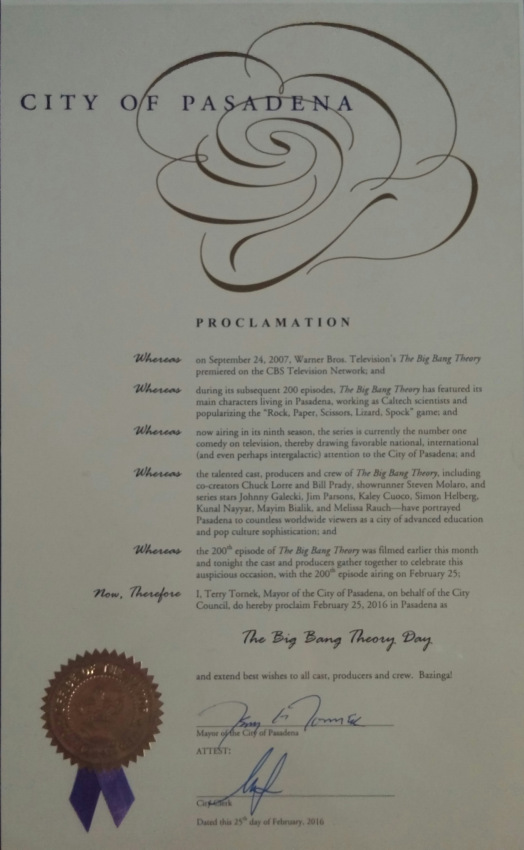 This is not a show prop.

February 25th is officially, “The Big Bang Theory Day” in the southern California city that harbors scientific genius at Caltech and the most delicious cheesecake in Los Angeles. A good question to contemplate is whether the greater achievement is having a day dedicated to a show or that a show filmed its 200th episode with no signs of slowing down?

It’s like asking who wears tighter pants: Penny or Howard?

The science-based sitcom will, years after its finale (whenever that is) leave a sustaining mark on Pasadena. Many sitcoms are based in or generically around large cities, like New York, Chicago, Philadelphia, Seattle and Los Angeles. Few are set in a specific, real-life community. The setting for The Big Bang Theory has (evidently) become its own leading character. Real restaurants, streets, destinations and schools are frequently mentioned in the show’s dialogue and plot lines.

The city of Pasadena means many things to many people, residents and visitors alike. The Rose Bowl parade certainly comes to mind. Ultimately, Pasadena is a familiar suburb within opulent Los Angeles.

And now there’s proof that Pasadena is the spot for the amalgamation of science and comedy.

Taxi Driver (The Funny One)

The must see interview is here.

Legendary sitcom director, creator, writer and producer James Burrows was given a 2-hour NBC special this past Sunday night. The shows we know and love were featured (Taxi, Cheers, Frasier, Will & Grace, Friends, The Big Bang Theory, to name a few) through cast interviews (most of them, anyways). The trademark gestures and words of wisdom by Mr. Burrows were revealed through comedic ribbing, including his surprisingly distinctive voice. For a man made famous for his shadowy presence, former NBC stars impersonating their former boss was akin to an SNL alum impersonating another behind-the-scenes maestro: Lorne Michaels.

The vocal range between the two men is kind of striking.

James Burrows spoke for a few minutes at the end of his NBC special for directing his 1,000th sitcom episode, but there is still so many more stories to be told.

And advice to be given.