C’mon, we all know there’s usually a fairly good chance of being surprised and chased by a T-Rex when taking wedding pictures!

Now it’s time to take this post to fifth gear, just as long as nobody leans back on the stick shift…

It’s So Easy a Caveman…Maybe Not

Last night, in the hot spring air of Cleveland, Ohio, the United States Men’s National Soccer Team played a friendly against Belgium. A final score in soccer can have a variety of meanings. For instance, a 1-nil affair could be thrilling or downright dull. In the case of the 4-2 final score between the U.S. and Belgium, it too had its defining dynamics.

The Belgians were terrific at making quick, cutting runs towards the goal while moving fluidly on counter-attacks while the United States’ defense looked like a castle with no draw bridge when the enemy charged. Combine the two together and there’s the final tally of 4-2. After each mistake the defensive backline of the U.S. made, the commentator, former MLS (& briefly USMNT) player Taylor Twellman, rigidly defended (at least one American was defensive last night) how the errors in the defense were easily fixable.

The score was 1-1 at halftime.

Then, during a fifteen minute span (56′-71′), the sharply dressed Belgians put three past the Americans to make the game a quintessential blowout. Again, patience was professed by Twellman regarding the latest, yet still “easily fixable” mistakes of the defense. We the fans just need to continue to be patient for these defenders to develop.

Three years ago during the World Cup in South Africa, the backline consistently conceded a goal within the first ten minutes or so of a game. Its predictability deserved its own mathematical proof. As it was said then too, the players in the back were still great defenders and all of this was just bad luck or was, again, “easily fixable.”

It was never fixed.

What we the fans and the team needs is not patience in the defense anymore, but rather serious changes in personnel. The “easily fixable” mistakes continue to happen over and over and over again. The defenders are not defending. This is a minor problem when you’re a defender. Perhaps, these players are not capable of making the easy fixes. The bottom line is that the wrong combination of players are being assigned to play directly in front of Tim Howard. Of all the lines in any formation for any team, the defense needs to be the most solid and have the strongest foundation. Period. Think about the backline of a chess or checkers game…

(And yes, I’m aware Carlos Bocanegra (34) and Steve Cherundolo (34) were both absent. However, the World Cup is about a year away and must-win qualifiers are right around the corner and conceding goals in bunches is a recipe for disaster)

Twellman also said during the broadcast that defender DaMarcus Beasley could catch anyone on the field with his recovery speed. False. He literally stopped running when coming back to defend a Belgian attack and his mark was the player who, seconds later, calmly played the ball across the box to his teammate who scored a goal.

Omar Gonzalez, heralded as a “great defender,” was absent-minded on the first Belgian goal as he stopped defending his mark around the American’s penalty box. He was absent-minded during other critical moments throughout the course of the game. Geoff Cameron (also a “great defender”) was directly responsible for the first goal as he stopped running and covering his man after an initial shot by the Belgian and save by Howard. The rebound by his mark was an easy slice into the back of Howard’s net (I will give Cameron isolated props for getting the equalizer at 1-1 about fifteen minutes later). On another occasion, Beasley literally bounced off his mark and the Belgian was then able to easily cut to the top of the 18-yard box for an uncontested shot on goal. Quite frankly, Beasley is not strong enough to be a defender.

The only bright side of the defense may have been Clarence Goodson.

The problem in soccer is that each team is only afforded three substitutions and having to replace your entire backline is usually not an encouraging sign.

The Power of a Horse 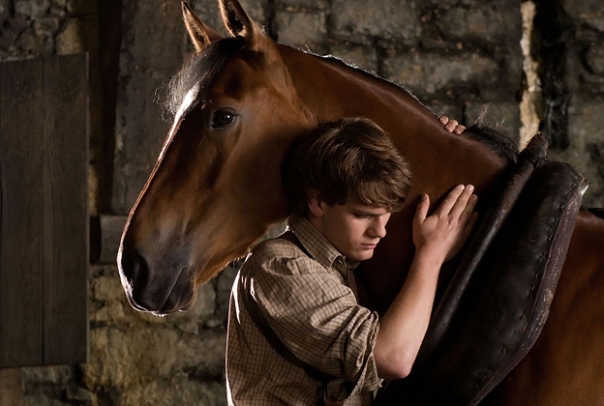 Steven Spielberg, one of the greatest movie directors of all-time, has introduced the public to a wide-range of characters, most of which grab our attention from the title’s alone. “Jaws,” “Indiana Jones and the Temple of Doom” and “Jurassic Park” are just a few examples. But what about, “War Horse”? First reactions do not stir up emotions of great excitement. It’s a story about a horse that was involved in World War I.

And yet, it is still Steven Spielberg after all. It is his impressive filmography that we can instinctively conclude that a great story is waiting to be told and that he is the perfect person for this job. Somehow, someway, we the audience will come to relate to a horse from a war. In some fashion, we will sympathize with a horse and be intrigued by its journey in a way similar to that of E.T.

Still though, this undertaking seems about as difficult as plowing a field scattered with rocks.

“War Horse,” to my surprise, is a beautifully tragic, yet inspirational story of unfaltering friendship. Throughout Joey’s life (the horse), he is connected to life all around him. As peculiar as it may read, Joey’s many relationships throughout his joyful and perilous journey resembled something remarkably close to kinship. Surprisingly, the love and admiration the various characters felt for Joey in their various situations was felt through the screen. We start to understand that a horse, in this instance, represents much more than a mere animal. Joey, to those who took the time, was profoundly more than power and dashing speed.

Watching this movie in the evening of Memorial Day was special. The themes of military service and, well, horses, sparked a flashback dating back generations. My Great-Grandfather, Albert C. Ziemann, served in World War I in the U.S. Cavalry at the independent age of 26. He registered for the draft out of Milwaukee, Wisconsin and was stationed in France.

The following are family recollections:

He was once in a weather observation balloon when it crashed into a French apple orchard. Like in the battle scene near the end of, “War Horse,” he too was gassed. Fascinatingly, General “Black Jack” Pershing (formally John J. Pershing) had, at one point, wanted a rare hawk of his to be stuffed. While asking up and down the ranks for an individual to assist him with this unique task, Ziemann, who enjoyed taxidermy as a hobby, volunteered his services to the General. For Ziemann, this was likely seen as a genuine win-win scenario because he would be doing taxidermy for the prestigious General and this job got him off the front lines.

Stuffing the hawk was expected to be a two-day assignment, but it stretched out to two weeks. One of the most incredible stories of Ziemann was that he helped General Pershing take care of his horses! It’s assumed this coincided with the two-week hawk-stuffing project. Regardless, what a tremendous honor and experience.

Members of my family have recalled that Ziemann enjoyed riding horses. One day in 1963, he had been riding horses. Devastatingly, later that day, he died of a heart attack. Despite the sadness of this memory, it is important because it portrays how his love of horses was not a two-week and/or temporary crush, but likely a lifelong love affair. The connection between a person and a horse is special and can endure in times of war and peace.

During this Memorial Day, in 2013, I found myself reflecting back to almost one hundred years into the past to my Great-Grandfather, Albert C. Ziemann, all the while relating his experiences to those told in the magnificent story of, “War Horse.”

From all of this, two things are certain:

I am very proud and amazed of my Great-Grandfather’s service during World War I.

And that Steven Spielberg is one hell of a storyteller.

After a quick rap, you will be transported back to the ’90s!