Cities all around the world are celebrating the New Year in mesmerizing style with fireworks that will paint the night sky in spectacular fashion. Tonight is one of the more special evenings because the entire planet parties with jubilation and optimism for what this year will bring. The possibilities feel boundless.

Few places welcome in the New Year like Sydney, Australia.

Everything listed above can be made more delicious with the addition of bacon. There are only a few undeniable truths in life, but one is the awesomeness of bacon. The alluring sizzle and signature taste is a welcomed treat at breakfast, lunch and/or dinner.

To celebrate today (Bacon Day), let’s enjoy a 20-second clip of How I Met Your Mother.

Ted’s reaction is legen–wait for it…

I just got a craving for bacon. Bacon is so good, especially when it’s thick-cut and applewood-smoked. The inviting aroma and that first bite…my goodness.

High-fives all around for Bacon Day.

Christopher Nolan’s next film will be…

Instead of venturing into the deepest depths of our subconscious or navigating towards the the farthest galaxies in space, Mr. Nolan and his wife (who co-founded Syncopy) and his brother Jonathan will travel back in time to the 1940s in war-torn France, possibly in a straightforward, linear fashion.

That, in itself, is a bit of a mind-bender.

“News began to surface over the weekend via French newspapers that Nolan was planning a WWII movie, and that he and his brother, screenwriter Jonathan Nolan, had been scouting in Dunkirk. The story centers on the 1940 evacuation of more than 300,000 Allied troops who were surrounded by the German army in the French city of Dunkirk”
–Rebecca Ford, The Hollywood Reporter)

As each new detail about Dunkirk involving the script, casting (of course Michael Caine will be in it), the biggest news is that Mr. Nolan appears to be widening his genre portfolio IMAX-style and, therefore, is taking his second daring step into the mainstream with a war movie.

I’m counting The Dark Knight trilogy as one step.

Is Dunkirk a hint of what’s to come regarding future Christopher Nolan projects? 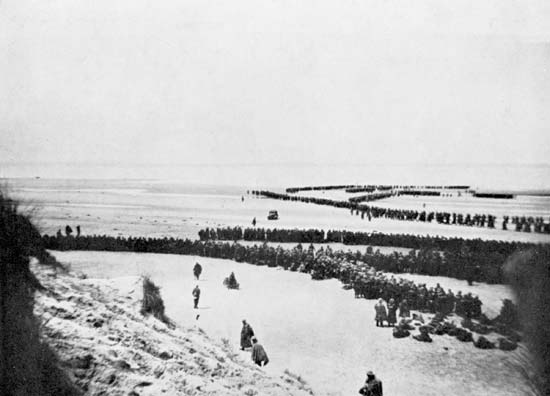 (“British and other Allied troops waiting to be evacuated from the beach at Dunkirk, France, 1940,” Britannica)

Odds are, we’ll bend our minds trying to answer that question.

Star Wars: The Force Takes Over

A week-and-a-half into its premiere and The Force Awakens has gifted 2015 with its second $1 billion+ box office monster (the first was Jurassic World). The space epic also became the fastest movie to achieve the aforementioned cinematic feat, barely edging out its prehistoric competition. Star Wars fanatics are undeniably confirming and showcasing their storied, wide-spread fandom to the world and its outer galaxies through ticket sales at the hyper-drive of the Millennium Falcon.

Fans are ecstatic that the old gang (and its new crew) are, as Han Solo says in the trailer, “home.”

Have an Awesome Week Filled with Discovery!