‘Masters of the Universe’ is a superhero movie released in 1987 that told the story of He-Man (Dolph Lundgren) and his skull-faced enemy Skeletor (Frank Langella).

Mixing actors and practical effects with (then) state of the art graphics, this movie became a cult classic. Not exactly admired by critics yet some of our favorite movies have received similar (unfair) treatment.

Again, that’s really true. And she delivered a great performance.

Oh, and the actor who played the principal in those ‘Back to the Future’ movies, James Tolkan, was in this movie too.

For this Throwback Thursday, let’s relax and enjoy the trailer for 1987s ‘Masters of the Universe.’

While a new live-action He-Man movie is set to be released in March 2021, it’ll be very difficult to match the ’80s superhero nostalgia and soundtrack of ‘Masters of the Universe.’ While it’s a movie that was made before its time, we should still be thankful that it was made when it was in 1987. It has a unique feel and cast that modern superhero movies just can’t match.

You can call it the differentiating (cosmic) key for ‘Masters of the Universe.’

‘Stranger Things’ Season 3’s Company Will Be New yet Familiar

The third season of the hit Netflix show ‘Stranger Things’ will drop on the streaming service (as the kids say) on the 4th of July. And, as seen in the final trailer below that recently dropped online, the ’80s nostalgia will reach peak levels alongside peak level thrills.

The science fiction amalgamation of ‘Stranger Things’ — Steven Spielberg meets Stephen King — is proof of why Netflix is a force to be reckoned with its 10-episode series model. There are things that can be done on Netflix that can’t be done on network TV. And after watching this trailer, it doesn’t feel like a stretch to say that season three of ‘Stranger Things’ will be the best so far of the young series.

Random Thought: It would’ve been a dynamite advertising crossover for ‘Stranger Things’ to have a release date of July 11 instead of July 4th.

Or, in other words, 7-11. In more words, the character Eleven and the 7-Eleven store would make for a perfect partnership. In addition to the show’s Nike campaign, it would’ve been awesome to get an Eleven-themed 7-Eleven slushie.

P.S. Here’s some of that 1985 nostalgia gold featured in this forthcoming season of ‘Stranger Things.’

A ‘Blockbuster’ Podcast Is Playing on a Streaming Service Near You

Then, when you’re done listening to all of those podcasts — takes about three lifetimes — there are even more podcasts to discover.

However, like in any industry and field of interest, there are pieces of work that rise above the rest. If the premise, coupled with an exclusive sneak peek is any indication, then the ‘Blockbuster’ podcast is one to be listened to for any movie fan generally and any fan of Steven Spielberg, George Lucas, and John Williams specifically.

io9 Gizmodo columnist Germain Lussier summarizes the exciting recreation of two cinematic pioneers and game-changers along with their equally dynamic and genius musical composer friend John Williams in their early years in the moviemaking industry beginning in the 1970s.

Created by Emmy winner Matt Schrader, Blockbuster is a six-part docu-narrative podcast dramatizing the friendship of George Lucas and Steven Spielberg as they were making their formative films, Star Wars and Jaws, with the help of composer of John Williams. Schrader has basically created a modern radio play, blending meticulous research with strong vocal performances, sound effects, film clips, and an original score, all into a highly entertaining audio experience. The show puts the viewer right there, with Spielberg and Lucas, for the moments when they changed movies forever.

The entertainment value of this kind of creative storytelling is a fitting nostalgic throwback (or flashback, since it’s Friday) that is something special. It reminds one of the Golden Age of Radio in America.

Below is an exclusive two-minute snippet (courtesy of Forbes) of the eight-part podcast involving George Lucas and then-wife Marcia Lucas during a possible a-ha moment for the listener (and perhaps George and Marcia at the time) that popular culture was about to change forever in some way with a far-out film that takes place in space. Interestingly, Marcia worked on the original ‘Stars Wars’ in 1977 — famously written and directed by her husband George — for which she won an Academy Award for Best Film Editing. 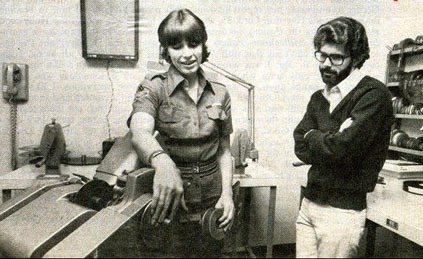 ‘Blockbuster,’ in just a couple of minutes, is intriguing (recreated) eavesdropping that is refreshingly simple and streamlined in its delivery. Ironically, it’s a must- listen experience for movie fans.

Season 1 of the ‘Blockbuster’ podcast is available on iTunes and Spotify.

Season Three’s Company Is Stranger Than Before

There is something coming on this 4th of July. And for the wisenheimer out there, no, I don’t mean just the 4th of July. Call it an event. Call it a happening.

But whatever you do, call it what it is:

Strange. Strange things. And then even stranger things as found in the brand new trailer for ‘Stranger Things 3.’

And now season three, which will drop on Netflix this 4th of July, seems to be made in the vein of any high school movie or TV show with storylines that take place in the quintessential mall of the ’80s. Now add a terrifying creature like ‘Alien’ and we’re all set.

‘Independence Day’ during the day and a ‘Stranger Things 3’ binge at night with Eggo waffles on the menu.