The Three Rs of Heckling

If being heckled–for whatever reason in some form or another–was a day of the week, it would be Wednesday. Why? Because we’ve gotten through Monday and Tuesday, and we’re feeling pretty good about the week. Then, just at that moment, it happens. The party appears to have been broken up.

Now it’s time to regain our composure for Thursday for what will, hopefully, lead to a Friday night with that well-earned cash money…

for the beer truck.

Proof That SNL is Best When You’re in High School

Laughing is not literally the best medicine, but it just might be a close second.

With the weekend upon us, the pressure is on to plan something unforgettably fun to do once the sun sets. We can’t waste a single moment. Luckily, Bill Hader and John Mulaney (as written about in yesterday’s blog post), created the best club promoter in partying history by combining an oddly entertaining email and a particular coffee barista in Chelsea, New York. Since readers of Jimmy’s Daily Planet are up to speed on the evolution of SNL’s Stefon from yesteryear (part of “Throwback Thursday”), it’s time to see what club has everything…

That moment had everything.

The greatest club promoter the world has ever known, Stefon, was the brainchild of SNL cast member/impressionist Bill Hader and SNL writer John Mulaney. As you would expect, the inception of this legendary character originated within the perfect storm of serendipity. Isn’t that the case with some of the best things in life?

For “Throwback Thursday,” let’s reminisce about the phenomenon that is Stefon.

(If it feels right, feel free to hold your hands up to your face and laugh)

Now, it’s time to hear from the writing guru who was the wordsmith behind the club promoter who loves rooms with broken glass.

This past weekend, Saturday Night Live was in some rare form: it was funny. While that may seem harsh, it’s really not that harsh. However, the triumphant return of Bill Hader and former cast-mate and now co-star in the film, The Skeleton Twins, Kristen Wiig provided genuine laugh-out-loud moments: impressions ranging from Kathie Lee Gifford to a war veteran mastering puppetry and, of course, you know who…

One word, one name: Stefon!

FYI – When watching this clip, notice that when Bill starts to laugh about the mention of a certain individual multiple times (plus a doorman zinger), it’s not rehearsed. Part of the story with Stefon is that the co-creator and co-writer of the character is John Mulaney and he would frequently try to trip his buddy up during the live show with new jokes/changes handed to him as he was walking out to the Weekend Update desk. Some of these changes and jokes, however, come without warning. This was one of those segments.

This was John Mulaney’s twitter post from the weekend: “Sent to Rob Klein last night. Apologies for misspelling Cortese. They didn’t tell Bill about any of it before air.” 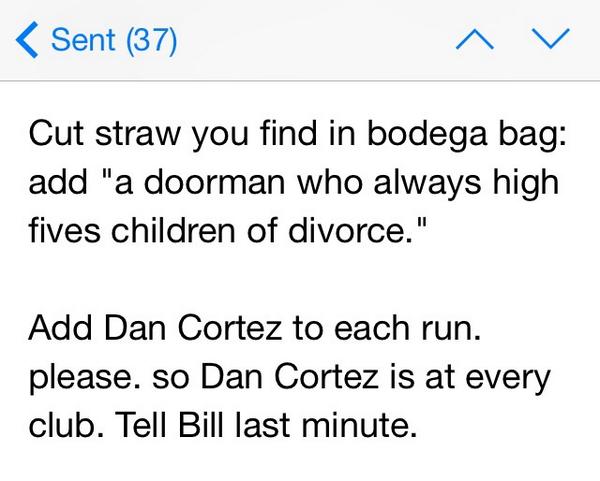 Here’s to hanging out with Dan Cortese this week (apparently, the odds are pretty good)!