While still early in its process, the publicity aimed at this annual musical gathering, with policy speakers and videos scheduled throughout the day, continues to draw some of the biggest bands and performers from around the globe. When I attended the first festival with a friend of mine, K’naan, the Black Keys, a special performance by John Legend, Band of Horses, Neil Young and the Foo Fighters (such an amazing weekend) entertained the crowd of 60,000-plus. It was a perfect day and night in NYC. This year, festival-goers enjoyed Beyoncé, Eddie Vedder and Ed Sheeran.

Have an Inspired Week!

Orange is the New Awesome

Today, I am wearing my orange gingham J. Crew button up shirt, black jeans and a pair of faded black Converse high tops. Why? I’m glad you asked.

It was one year ago, on the Friday night before the Global Citizen Festival in Central Park in NYC, when I decided to take a stroll in the early evening around the neighborhood of my hotel when…

Yes, that is Dave Grohl! And he voluntarily took the picture himself!

For the full recap of how the entire day/weekend unfolded (and there is more to this story and day), please check it out!

Not only is orange one of my favorite colors (the Dutch), but by wearing this shirt on this day, I was reminded of how great it felt to just wander a little bit. Every now and again, it’s really nice not to have any plans and to simply walk outside and let life happen.

We are living in a world that is increasingly organized and scheduled down to the minute. There are times when it’s really nice to know when something will happen. Having structure is not bad, but there still needs to be plenty of random moments when getting a little lost is okay. Sometimes, that’s when you find what you are really looking for or hoping to find, even if you couldn’t think of it beforehand.

It took me only a matter of minutes to turn off the hotel television and walk outside for a routine stroll around the neighborhood in the early evening before meeting a girl for dinner (check out the link above). Just a casual decision.

And yet, here I am, still writing and thinking about that day one year later.

“There Goes My Hero!”

It all started with a Facebook post from the Foo Fighters one August afternoon reminding fans to sign up for online activism. With just a few targeted clicks, registered members spreading the word on eliminating extreme poverty would automatically be entered into a lottery for the Global Citizen Festival in Central Park’s Great Lawn in late September.

For those wondering, this effort is further evidence that social media is here to stay, in one form or another. This is the age we live in now. Anything can change and happen in an instant.

Having never seen Foo Fighters live, this seemed like a very good/necessary proposition to check out. Once a ‘global citizen,’ then articles needed to be read, videos watched and then shared through social media. These efforts amounted to points and when 3 were earned, our name was entered into a lottery for free tickets to this huge concert/festival. Taking few chances, somewhere between 12 and 15 points were accumulated. The articles and videos are heartfelt and are enlightening as variations of extreme poverty around the world and the individuals leading incredible change are highlighted. They are powerful moments.

The time would soon come for the digital wheel to spin and hope for the best. I was cautiously optimistic.

A few days later, one solitary e-mail brought about an excitement so grand it was as if I was going to be in the presence of a Victoria Secret model (to some degree yes, but more on that later). In reality, here is the e-mail that caused an ecstatic reaction:

Congratulations — by taking part as a Global Citizen, you’ve won two tickets to the Global Festival!

Friday, September 28th at 8:55 a.m. was the first flight of the day to Reagan National Airport and then onto LaGuardia. Problem was that the scheduled flight to NYC was cancelled due to weather conditions, yet word spread quickly among my fellow passengers that it was not even raining at our hopeful destination from their friends on the ground. Hmmm? The next step was to get in line at, and by this I mean sprint, Customer Service. These were the last two words anybody wanted to hear.

I was in the first third of the line and by some stroke of luck behind a very pretty girl. Mustering up the courage to talk to her, we ended up having a nice conversation. As it turned out, our hotels were fairly close to each other and we decided to split a cab into New York city.

Before venturing into the city, I asked her out to dinner. To my surprise and elation, she said yes with a smile. It seemed almost like a movie. Two strangers meet before a rescheduled flight who are from the same state going to the same incredible concert for the same bands and are staying within two football fields of one another in one of the biggest cities in the world.

As Steve Martin’s character from “The Out-of-Towners” said at the end of the movie after crazy, unpredictable and amazing things had happened, “Only in New York.”

We both decided to wind down on our own after a long day of flying and driving. My late afternoon stroll would come to be the best and worst decision I made that day.

On my way back from venturing around the neighborhood of my hotel, I passed dozens of people. They were mostly all a blur. Then, I saw somebody slowly pacing up and down in front of his hotel. I thought I was seeing a mirage. As I passed this individual who was on the phone, I got about forty feet down the sidewalk and turned back, still in disbelief. About a minute went by and I was casually looking to see if the phone conversation had ended, wondering if I should go back? It then struck me that this was one of those “one in a million” opportunities. I nervously and excitedly strolled back to meet “my hero.” 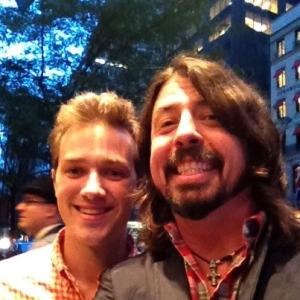 Me and Dave Grohl!!

“Mr. Grohl, could I get a quick picture with you?”

As I went to hand my phone to one of his friends, he took my iPhone 4s, tapped the reverse camera button and took the picture himself while saying, “Here, I do this thing all the time.”

“Thank you so much!”

“I came from Columbus to see you tomorrow!”

As it turned out, returning to my hotel room after this unbelievable encounter plus the time spent making a reservation actually cost me the date for that very reservation. Her friends likely had arrived into town earlier than she initially thought and she was already out. These things happen. Talk about a pendulum swing of a high and low in less than half an hour! Sometimes that’s just how the ball rolls.

Many things could be written about this weekend, including: standing in line outside Central Park and at the concert with a good friend from college from 11:00 a.m.-9:00 p.m. (should have gone East Gate), the sheer atmosphere of 60,000 people flowing into an outdoor concert on the Great Lawn, seeing actress Olivia Wilde and Victoria’s Secret model Erin Heatherton speak during the concert, the ‘girl from the line’ and I trying to spot each other at the concert by texts, watching the Black Keys and Foo Fighters perform live for the first time (w/ Foo Fighters going on hiatus afterwards), getting Belgian fries in the lower east side or riding the 2:00 a.m. train to the Bronx.

Listening to the Foo Fighters, as with countless other fans, is more than just about a rocking sound or cool lyrics. It’s about resonating to the messages and emotions of their songs. The economy is weak and like many people, I am not exactly at my ideal job. However, winning tickets to an outdoor festival in Central Park with great bands plus one of my favorite bands, meeting a girl and coming within 20 minutes of a uniquely New York evening on the town and meeting one of my all-time favorite people in Dave Grohl on the street were all validations that big and amazing things can happen with just a few clicks, a few tweets or a spontaneous conversation one afternoon. In a moment’s notice, greatness can strike. These events were immediate confirmations of the songs I listen to, love and know by heart sung Saturday night by, and I can confirm, ‘the nicest man in rock.’

Never in a million years did I imagine I would meet, let alone get a picture with, Dave Grohl. Perhaps I should have been thinking in miles as opposed to years…