Sometimes, a picture is worth more than words can describe.

“A rainbow appeared over New York City the day before 9/11, and many noted that it appeared to emerge from the World Trade Center site, where the Twin Towers were felled by terrorists in 2001.”
—Nick Sanchez, Newsmax

September 11, 2001 began as a serene Tuesday morning that quickly turned into one of the darkest days in American history.

Fourteen years later, the New York skyline and the Pentagon still reveal unthinkable images of gigantic planes crashing into buildings, causing destruction and fire with billowing clouds of smoke, brave people running for cover and heroes running into danger. It’s difficult to put into words what we all felt that day, including the personal connections to people in those cities and on those flights that day.

And those who were almost there.

The awe-inspiring picture above (showcasing one of nature’s best tricks) doesn’t heal the pain from September 11, 2001. However, after so many years, still with a feeling that it just happened, it does offer a small glimmer (and sign) of hope for the future as a rare double-rainbow shines over New York City with the One World Trade Center and an American flag perfectly in frame.

They say a picture is worth a thousand words. 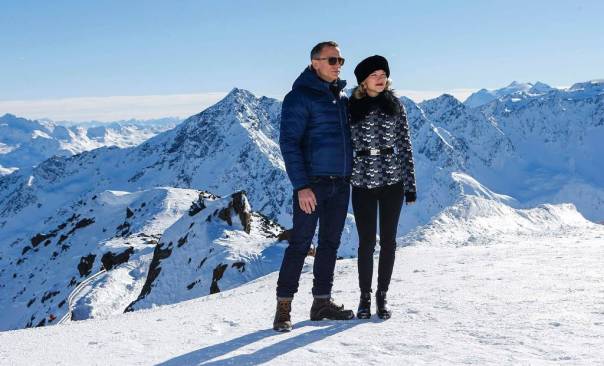 How about a thousand jumps for joy? (A safe distance from the edge, of course).

007 standing tall atop the Austrian alps with his gorgeous girl by his side reveals a nostalgic return to classic Bond locales, luxury and action. While the details are still obviously unknown for Bond’s 24th movie, the anticipated excitement continues to grow with each new released detail and photograph (cast, locations, car, style). Skyfall undoubtedly generated tremendous buzz and pressure, specifically because it was the famed Broccoli spy franchise literally rising back from the dead. The Sam Mendes-directed Skyfall impressed audiences worldwide. And Mendes’ return to his chair with his name on it for Spectre has taken Bond-hype to a new high. Many suspect he will add the necessary 21st century advancements (cars, gadgets, etc.) and storytelling methods/modern twists and turns, while incorporating vintage, fan-favorite Bond humor and wit.

Jimmy’s Daily Planet expects Spectre to be on the same cinematic level as the phenomenal Casino Royale from 2006 starring Daniel Craig seen above, except better!

The sky is the limit for Spectre…literally and figuratively.

The best part about tonight is how the entire world celebrates New Year’s Eve. If there was ever a day to literally hang out in Space, it would be tonight/today. The colors seen in the night sky will represent every color in that gigantic Crayola crayon box from our elementary school days.

“Was that firework orange with twirling turquoise?”

It’s a continuous stream of fireworks, light shows, boisterous music, confetti, happiness, kissing, goofy hats and crowds of people joyously dancing in the streets, homes and in hotel lobbies that’s a spectacular display of hope and the infinitely possible. Welcoming in the new year is a universal truth that’s proven in every language in every corner of the globe. Unfortunately, it’s impossible to fully report on each city’s unique festivities. Fortunately though, there are plenty of places to choose from. As it’s become commonplace, Bing posts a picture each day that dazzles the eye. Today was no exception.

When my family went to Iceland, we were there for New Year’s! Luckily, there’s a photo of what it would be like to be on the pristine glacial lake of Jökulsárlón, Iceland, which is a better sight than the much-hyped, expansive collection of celebratory bonfires around Reykjavík we were told about…

Here’s to a Perfectly Picturesque 2015!

Dude is Going to Look Like a Lady Again

Normally, there isn’t so much news about sequels made within the same 2-week period, especially when it concerns follow-ups to beloved ’80s and ’90s classics.

Strangely, the latest scoop of a man dressing up as an old Scottish nanny has the potential to revive Steiner Street to its 1993 golden presence.

It was recently announced that famed scribe and director Chris Columbus put his hands up in the form of an “L” and reverse “L” and joined his thumbs together for a vision of a Mrs. Doubtfire sequel in the joyfully eccentric northern California city of San Francisco.

Oh, and this is happening with the wonderfully crazy, wild and spontaneously hilarious Robin Williams.

It’s impossible to doubt the comedic fire he’ll surely bring to this sequel.

While we’re not experiencing hot flashes at this news, we’re all experiencing flashes of our favorite scenes from this story of a marriage and family of three children broken up by divorce in a funny, yet very real fashion. And the fact that the 1993 original was funny, sweet and painfully real with the tugging of our heart strings throughout was a defining dynamic that perfectly complemented the unforgettable comedic one-liners of Robin Williams and, of course, a stellar cast.

There is no release date, but that shouldn’t stop our cautious optimism of what will eventually be projected on the silver screen for multiple generations to enjoy.

Thankfully, somebody boxed the trailer from Mrs. Doubtfire and then shipped it onto the Internet (that process can get confusing).

And Uncle Frank, maybe make an extra mask or two…just in case.

P.S. I’ll never forget when my family and I were at a cafe in Kauaʻi several years ago and my sister and I were ordering food just feet from somebody who looked very familiar…

Yes, he was 007. And yes, he was super nice. But, he was also the hapless Stu Dunmeyer.

Incredibly, I believe he was driving a Mercedes!