The Wow Factor 22 Years in the Making

Seeing the boat of tourists approach Isla Nublar, watching the new gate open to reveal this long-awaited theme park with an adapted John Williams theme song nearly brought me (and I’m guessing the entire audience) to tears of joy.

The Jurassic Park follow-up we’ve been waiting for is finally here! John Hammond’s dream has been realized.

While Jurassic World is not Jurassic Park, the franchise is back to where it belongs. These two are beautifully connected through a 22-year storyline, with Jurassic World showing off lots of nostalgic Easter eggs that will thrill fans. Still, the 1993 classic will always be the best in this franchise. Period. Moreover, it will always be considered one of the best movies of all-time. This needs to be said before beginning a big picture review of Jurassic World.

Mr. DNA looked the same, but sounded different (stick around for credits) both scientifically and plot-wise.

And that’s where we begin. Jurassic World looks like the original in many ways, yet it’s refreshingly different and creative for 2015 and beyond as it takes genetic engineering to its scariest level yet. John Williams made his heart-warming musical cameo, but Michael Giacchino showcased his skills with an inventive musical score.

Much like Seinfeld in the ’90s vs. The Big Bang Theory of the 2000s, it’s the difference in tone and style between adults and kids and young adults and kids. The cast differences are generational in a lot of ways, which is a vital plot point in Jurassic World (Mr. Trevorrow is 38 years old, FYI). Interestingly, Trevorrow won’t return to the director’s chair for a follow-up, but will be involved in some capacity. He said that like Mission Impossible, a new director can add fresh perspective to the story.

The opening two scenes felt like Spielberg was in the director’s chair. After this quick introduction, Tevorrow made it clear that the tone of World’s first chapter would vary from Park’s first chapter. Regarding the main characters, there was a consistently subdued emotional core to them. This initially curious and admittedly frustrating dynamic, with reflection, was intentional and necessary. Along with the fans, the writers aimed to build the magic back up from the commonplace of dinosaurs in cinema from its 3 previous films.

With some time, critics may realize that some lack of awe from the characters was quite an astute observation of our times. A new world-threatening superhero movie arrives in theaters every few months. It’s nothing new. Kids today are a little numb to grand spectacles on film which, sadly, makes them a little unappreciative towards the still scary villains and scenarios in Jaws and Jurassic Park. This was actually a clever plot-point in the script. Owen (Chris Pratt) training and cautiously communicating with deadly raptors and riding beside them is terrifyingly exciting. And Pratt delivers in Jurassic World, as does the rest of the cast. The tradition of combining seriousness and clever humor was alive and well.

The following analysis is made from a place of devotion, wonder and, most importantly, perspective. I am on par in protecting this franchise’s legacy and being a “Jurassic Park” fan as Steven Spielberg.

The goal for any follow-up to Jurassic Park is to make it the second best in the franchise and Jurassic World did that with a ground-shaking roar. There were new characters, impressive new dinosaurs (land and air), fantastic settings and a new reason to bring the dinosaurs back to the silver screen after 14 years, but 22-years to be more precise. The business leaders at the fully-functioning theme park wants to spike attendance in a way they’ve never done before, so their geneticists created a hybrid dinosaur that would dominate any era in history.

There were great action sequences with special effects and practical effects, yet it did unfortunately lack a heart-pounding, paralyzing scene comparable to the famous raptors-in-the-kitchen ordeal. This is a minor critique, but that kitchen scene was/is so intimately scary. It added another dimension to Jurassic Park.

Since movies cost money, it’s nice to at least make a few dollars on its release. It’s safe to say Jurassic World accomplished that.

“Jurassic World found an extra $4 million lying around and can now boast the domestic opening weekend of all time with $208.8 million, despite earlier estimates declaring that it had grossed a “mere” $204.6 million. Oh, and it grossed $524 million worldwide too, for the biggest worldwide debut of all time (Forbes).”

The answer is yes, there will be a sequel. I already cannot wait! I’m still planning to see Jurassic World again, this time in IMAX 3D. The above numbers are a testament to the movie itself, time away from the spotlight and top-shelf quality nostalgia born from Spielberg and Crichton.

And Chris Pratt is signed onto said sequel. The rest of the cast is still TBD, which is understandable considering the blockbuster smash was released a mere 3 days ago, but the youngest said he would do “50,000” more of these movies. Boomeranging back to the perspective element of this review, recall that Trevorrow and Co. titled this movie as a world, not a park. This appears to be the beginning of an arc for these characters that will continue to develop over time and circumstances. Colin Trevorrow has indicated that there are ideas/opportunities planned beyond this Jurassic World. Patience will be a virtue for properly judging Jurassic World for its overall purpose and impact.

This summer blockbuster literally appears to be the pivot point in the franchise between the past and its revitalized, open future.

Jurassic World is an awesome movie with originality and amazing moments throughout. The plot-twists were creative and they worked. It was well-worth the wait, but that special magic and life lessons from the original were respectfully absent. Part of that is because it just may be impossible to recapture that. Part of it is the lack of an older, sage character. Part of it is because it was done with the perfect cast with the perfect story at the perfect time in 1993 with Steven Spielberg at the helm. Lightning in a bottle. Part of it may be, however, that this emotional element and energy is being set-up for Jurassic World’s sequel, of which there are hints and openings for at the end of this film. There are several intriguing loose ends that need to be tied and expanded.

What will the sequel involve? The inventive Dr. Wu certainly wasn’t hesitant to take his hybrid dino DNA out of Jurassic World.

There is far too much to discuss about Jurassic World, the story, the characters and the next director to be contained in one post. It’s overwhelming. This is just another page in the book and there will be more in the coming days.

Many feared this franchise had run its course, especially after Jurassic Park III. However, Colin Trevorrow proved its revival was not mission impossible. 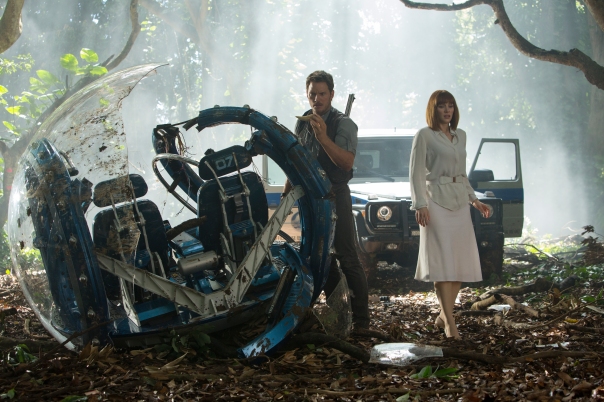 It has the entire world to explore…