This Beauty Will Be a Box Office Beast

That has been the question for why Disney is even attempting to bring back the wondrous tale of Beauty and the Beast that many (if not all) could easily argue defiantly marked its zenith of fanfare and adoration way back in 1991. And a legitimate query it is. The early ’90s  animated movie by Walt Disney Pictures is not only one of the greatest animations in cinematic history, but one of the most treasured movies in cinematic history.

Put frankly: There is more to lose from a (mostly) live-action revamp than there is to gain.

And yet, the trailers and specialized posters for the 2017 version of Beauty and the Beast continue to pass the test of anxiously curious fans…and then some.

With the final and most comprehensive look to date, Walt Disney Pictures has just released its newest trailer for the film that will remind us why Emma Watson’s portrayal of Belle may be reason enough for this live-action rendition of a beloved classic.

Whatever the verdict, this just might be the closest (and best) attempt to bring some of the animated magic to life beyond the brilliantly colorful pen strokes of the ’90s.

Man’s best friend is a dog.

1977 was quite a year for moviegoers, including the cinematic wonders Star Wars and Pete’s Dragon. While each film showcased its graphics differently, both movies left a memorable impression with everyone who saw them. Star Wars: The Force Awakens was a massive hit (putting it lightly) at the end of 2015 with its throwback to practical effects as the first choice and CGI as the alternative when realism needed just a little imaginative assistance.

The first peak inside the revisited world of Pete and his magical dragon seems to be leaning on that same dynamic.

Have a Magical Week!

A Magical Finish For Sure

A tale of two halves in the most explicitly literal sense.

Bosnia-Herzegovina owned the first half and darted two goals past the frustrated American pipe-master Tim Howard for a 2-nil lead (the worst lead in soccer…).

The United States of America owned the second half where competent and creative ball movements by Michael Bradley led to great finishes, three of which from the man who has been on a hot streak of goal scoring this summer: Jozy Altidore. A hat trick is always a nice souvenir. The U.S. won the game in surprising fashion 4-3.

Who saw that coming after halftime? Actually, perhaps Bosnia-Herzegovina should have been more perceptive to this possibility after they substituted half of their team (six players) with slightly slower and slightly weaker replacements. Regardless, a valiant effort on the part of the USMNT.

For the game’s analysis, a short list has been created that details the highlights and lessons from last night’s comeback victory in Sarajevo, Bosnia-Herzegovina:

-There needs to be “A Bradley Touch Tracker” as a graphic on the television screen (when he touches the ball, good things tend to happen).

-On a similar note, there should be “A Donovan GPS Tracker” (Just so the coaches and viewers can confirm he’s still on the field for those big games when he disappears for 15 minutes or so. “Oh, there he is! Yes, he’s still out there somewhere over there…”)
Important Note: Landon Donovan was not there last night and I’m a fan, but this would still be very useful

-The USMNT did not (and has yet to) start a back-line that can successfully play a staggered defense where the two outside defenders can frequently go forward, mostly due to the lackluster performance of Cameron and Brooks together in the middle.

-Jozy Altidore: keep shooting and flexing your muscles for 90 minutes.

-Spread the field from sideline to sideline with outside midfielders who will attack with vigor!

-As Taylor Twellman said, the real ticket to buy is the one for Jürgen Klinsmann’s halftime speeches: wow! Plus, Klinsmann continues to be a master of substitutions. Gut gemacht!

One constant that is becoming increasingly apparent is that the USMNT will be a second half, come from behind squad. The challenge is that most of the top teams in the world are well-versed in the “two halves of soccer” strategy. And most will not take off their best players after 45 minutes…

Just as I wrote about “Fool’s Gold” regarding the Gold Cup, there are still some smoke and mirror effects going on with these recent results. The head coach has yet to put the 11-men onto the pitch who will amaze an audience for 90+ minutes without those very same spectators being skeptical and wondering what the catch was afterwards.

Klinsmann can no doubt work his magic towards something potentially historic, but the fans are still stuck watching the mistake-prone rehearsals with the “big show” less than a year away…

Taking “This Room Comes with a View” to a New Level

The streets are packed. Bustling with men, women and children, street vendors each attempting to lure customers to their products/food with the branding, “The Best…” and that beautiful girl in between the commotion with a face that stops time like the circus tent scene in the movie “Big Fish.” Bodies are encapsulating me in the narrow space reserved for my family’s walk to our destination. Some of those going about their daily ‘dance of life’ are questioning my families’ very presence. Existing in their bubble of reality can sometimes require an escape in the literal sense (to be more incognito) as well as the metaphorical sense.

How will this chaos stop and change into a friendly place to mingle and get a little lost in? Most times it can be alleviated in just a few predetermined steps. In some cases though, it may require an athletic hop, skip and a jump (as was the case in downtown Cairo).

Whether enduring the camel two-step on the way to the awe-inspiring ancient Pyramids of Egypt or the economic metropolis of Hong Kong with its towering presence, each cannot be fully seen without a proper entrance. Sights of the mythical desert Sphinx, a pristine beach on the Seychelles Islands and the ceiling of a Norwegian barn were crisper, sounds of giant flies in the Australian Outback, crashing waves off the Sydney Harbour and the swoosh of snow while the snowmobile ahead of me is trying to avoid hitting an adult buffalo in Montana were heard with tremendously clear acoustics and smells of spices, fish and heat itself shocked my nose because of how and where I arrived at each of these various locations.

A reservation and simple entrance, made after an exhausted day of traveling in planes, trains and automobiles, can make all the difference in establishing a destiny of an exciting journey or tour bus boredom. It’s the contrast between television’s regular definition and high definition. Quite literally, there is no comparison.

Walking into the right hotel lobby in cities and countries all around the world has repeatedly solidified incredible enjoyment of countless vacations and trips (A quick shout-out and “Thank You” to my parents as I have been very blessed to travel and stay in the places I have). A busy European downtown, Swedish countryside or Canadian ski town can open up and reveal itself in ways so spectacular that they are nearly impossible to observe otherwise. You no longer feel like a visitor or tourist, but as one of the locals. You see small shops on the corner and quickly scurry in to take a gander at the delicious treats. Disguised restaurants down alleyways are discovered and result in being a wonderful adventure in more ways than one. You transform into an unrestrained explorer.

A grand, uniquely original, expensive and inexpensive hotel alike can take your trip and turn it 180 degrees into a once in a lifetime vacation.

My family’s vacation’s have taken me to: the original Ice Hotel in Jukkasjärvi, Sweden, a Stabbur in Norway, the unforgettable Club SA (Salvation Army) in Reykjavik, Iceland, a hotel next to a prison in Chiang-Rai, a gorgeous beach side resort in Bali, the stunning resort in the Seychelles off the east coast of Africa, a hotel in the jungles of Costa Rica, a hotel literally in the shape of a crocodile in Kakadu National Park in Australia, a hotel in Berlin, Germany where we, no joke, slept in the floor (each room was different & one had coffins…), a castle in Dublin, Ireland, an ultra-modern and high-tech tower of a hotel in Cardiff, Wales (best beds on the planet!), in the middle of the Wahiba Sands desert in Oman in a black and white tent with no electricity and in a room in the docked Queen Mary in Long Beach, California, to name only a few.

Rooms that are cramped with bunk beds are not viewed with a heavy sigh, but instead laughed at with amusement. A hidden and ‘experienced’ (code word for old) hotel in the less populated and less glamorous area of the old town can be viewed as a once in a lifetime moment off the beaten track of every other traveler (FYI-Old Dubai and New Dubai are correctly distinguished as such).

But now, I have a much wider view and appreciation of Dubai than most because of the unconventional choice made in regard to the hotel that night.

The decision to stay at a luxurious hotel for a night in Hamburg, Germany during the 2006 World Cup proved to be a sound decision. As luck would have it, the U.S. Men’s Soccer Team was staying at this hotel! It became clear on the drive up that there was something going on or somebody special was staying there because the surrounding area was blocked off with heavy security. Not only was it special to see the players casually walking around, but the room was magnificent. It is without question one of the moments from that trip I will never forget.

Those same jam-packed streets that are reminiscent of episodes of “The Amazing Race” were soon seen as a charming means of visually capturing the culture on the way to a museum with ancient artifacts and treasures. Hotels are vital to not only a night’s sleep, but is directly related to the experience and consequential memories that greatly define our perspectives. They are an important ‘first step’ during trips/vacations.

Perhaps most importantly, the right hotel will grant you a temporary resident’s visa with a uniquely special suspended outlook of the grand nature of a city, town or village. Your acclimation to your new surroundings gin up an adrenaline rush that is both exciting and full of curiosity. There is this freedom of knowing that you are just visiting and that there are very few (if any) consequences to your decisions while staying inside the boundaries of common decency and respect.

It sparks a renaissance within yourself about life and the world.

Even domestically, choosing a hotel is paramount. It was only a few months ago I was in a familiar city: New York. I picked the hotel for its surprisingly affordable price and because of its proximity to Central Park for a concert the next day. Hotel wise, I was staying in a new area and decided to take a stroll on that Friday in the early evening. As a result of the hotel I picked, I happened to walk past (& ultimately returned to) this gentleman on the street who I recognized standing in front of his hotel.

Once again, it was an amazing pleasure to meet you Dave Grohl. 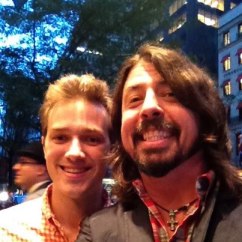