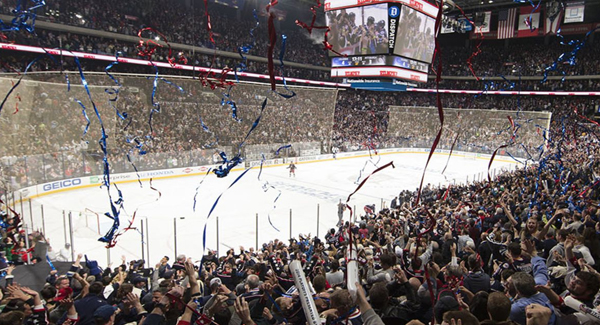 The 8-seed Columbus Blue Jackets swept the 1-seed–and Presidents’ Trophy-winning–Tampa Bay Lightning in four games in the first round of the 2019 Stanley Cup Playoffs.

This remarkable feat was the first time:

Was last season’s four-game collapse against the favorited Washington Capitals the odd springboard for the Blue Jackets playoff success thus far in 2019? That’s probably a safe presumption, specifically when discussing the third game in this series. More broadly, Columbus has arrived in a way this city has been waiting around two decades to witness.

something they don’t want to face-off with anytime soon.

The Crew Had One Goal for Tonight

All they needed was one, just one goal.

Columbus Crew SC fell 1-nil to Toronto FC in Canada tonight in the second (and decisive) leg of the 2017 MLS Eastern Conference Final, thereby preventing the black & gold from hosting an MLS Cup for the ages. Admittedly, as a Crew fan from the beginning, it’s difficult to find the words in this trying moment. The chances were there for that critical one away goal, but Justin Meram and Ola Kamara couldn’t place the ball in the back of the net.

That one goal was right there…

By the way, huge props to the next USMNT goalkeeper Zack Steffen for another fantastic penalty kick save in the 26th minute.

And in predictable snake-like behavior, MLS Commissioner Don Garber claimed he was “stuck in traffic” so he didn’t have to answer questions live on FS1 regarding his active participation in the deception, sabotage and attempted removal of the Crew from Columbus. Without diving deep tonight into the ongoing shameful acts by Crew SC owner Anthony Precourt, Crew SC President of Business Operations Andy Loughnane, Precourt Sports Ventures President Dave Greeley and MLS Commissioner Don Garber, I have just one thing to say right now:

The #SaveTheCrew movement is not over and will continue far beyond this MLS post-season. The efforts behind the rallying cry “We’re not done yet” will not yield because if Columbus ceases to be home to a professional soccer club, then so goes the identity and beating heart of American soccer in its capital city.

The Chill of Nil-Nil

Not the best case scenario, but also not the worst.

Just getting back home from the nil-nil draw between the best damn fans in MLS land, more reflection, and analysis on tonight’s tense game will follow tomorrow. One thing’s for sure at this moment, which is that the city of Columbus continues to solidify its rightful place as THE soccer capital of the United States of America. The fans who rocked the sold-out Crew stadium on this chilly November night were passionate, excited and inspiring. The history of the Crew in MLS (and USMNT’s Dos-a-Cero) is unmatched.

Once again, the very identity of American soccer, let alone MLS, is at stake with keeping the Crew and professional soccer in Columbus. And fans let everyone in Crew Stadium hear it with more chants for Crew SC owner Anthony Precourt, as well as sporting a special banner before kickoff that will be featured in tomorrow’s blog post.

Until next Wednesday’s second leg of the Eastern Conference Final in Toronto, let’s all memorize and sing the newest Crew chant inspired by the timeless classic (and very appropriate) Les Misérables.