The Bright Sides of Japan

The stunning majesty of our planet knows no bounds yet we face myriad boundaries that prevent us from experiencing these, at times, indescribable wonders.

Having been fortunate to have parents (shout-out to my amazing parents!) who prioritized traveling the globe in order to venture to various cultures around this floating marble, I am keen to discover new places, people, and wildlife whenever possible.

Even if I’m restrained to my laptop on a random Tuesday.

What am I thinking right now? Can you read my mind?

Maybe it’s about the good old days or being an honest man? The restless heart? The Promised Land?

But First, This is Today’s Enigma

When news reports change, it’s essential to report those changes.

This is one of those moments.

The supposed breaktrough in the mysterious disappearance (well, reappearance) of Amelia Earhart and her navigator Fred Noonan was the focus of a recent blog post on Jimmy’s Daily Planet. So, when this new revelation concerning the content of the aforementioned blog was revealed today, I wanted to make sure to update this developing story with the most current and accurate version.

Interestingly, the identification question in this photograph as to whether Amelia Earhart and Fred Noonan are two figures among a group of people featured in the now famous picture, isn’t being totally refuted. It really looks like them. Until the Japanese blogger recently pointed out the critically important publishing date, the facial and body recognition seemed like the biggest hurdle in this 80-year mystery.

Instead, another giant hurdle of mystery has been put in its place.

For now, it appears the world has returned to not knowing the official whereabouts of Amelia Earhart and Fred Noonan after their plane went missing during their attempted flight around the world back in early July of 1937. All that can be done now is to wait for The History Channel’s expanded response to the claim made by the Japanese blogger and to continue to search for clues and answers.

Think about this turn of events:

The Evidence Was Sitting Right There

If a picture is worth a thousand words, how many words is the photo in the video below worth?

To many, the photograph’s value at the center of the following video is of historic value.

It may be safe to presume that this ground-breaking discovery, and subsequent documentary this weekend, will be an equal substitute to coffee this morning. The jolt that the photo presents in the video above, which is the focus of the newest speculation regarding Amelia Earhart and Fred Noonan’s famously mysterious disappearance, could very well be enough to change history and give credence to stories that were, until now, just considered rumors.

While not 100% proof (how often is there ever 100% proof?), anyone with common sense will and should reach the conclusion that Amelia Earhart is sitting on the edge of the dock with her back to the camera in the aforementioned photograph with Fred Noonan nearby in Japanese territory.

Stay tuned for the full documentary premiering on the History Channel this Sunday at 9:00 p.m. ET.

Doesn’t this incredible revelation concerning Amelia Earhart and Fred Noonan seem like the springboard for a future film by either Steven Spielberg, Kathryn Bigelow or Clint Eastwood? This recent photographic discovery and analysis is likely not the end of Amelia Earhart’s harrowing story, but instead just the beginning.

In this case, history isn’t so much repeating itself as providing the world the first reputable replay of a tragically mysterious event. 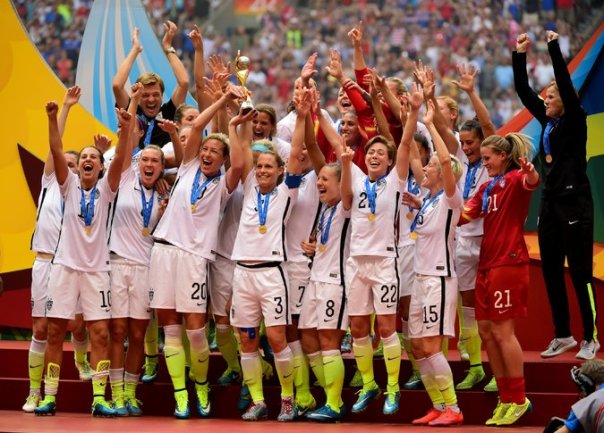 The Americans proved revenge is best served with a 5-2 win in the 2015 World Cup Final.

For the third time in their storied history, the United States Women’s National Team (USWNT) lifted the most coveted trophy in their sport: the World Cup. The Americans absolutely blitzed the Japanese from kickoff with four goals in the first 16 minutes of action, including Carli Lloyd’s hat trick. This shocking start was sublime for fans of the red, white and blue. Two-nil is firmly established as the worst lead in soccer, but the USWNT only gave their opponents a nine minute window to respond, which they dominated with superior possession, defensive prowess and more sensational goals. By the time you caught your breath, another highlight sequence ended up in the back of Japan’s net. And this game proved there was no shot too far-fetched, as Lloyd demonstrated in the 16th minute with a goal from half-field!

The 2015 World Cup Final was an amazing showcase for an American side visibly motivated to avenge their loss to Japan in the championship game four years earlier. Winning their first World Cup in 16 years in the shining sun of Vancouver was a fantastic sight for the USWNT, its coaches and fans. This generation of champions has inspired the next generation of soccer players with an unforgettable performance.

This game was the final big event of the 4th of July weekend and it was the perfect ending to our celebration of our nation’s declaration of independence 239 years ago and our relentless belief that anything is possible, which is a quintessential characteristic of the United States of America.

Have a Championship-Caliber Week!