A smile doesn’t go on for a mile…

it lasts a lifetime.

Craig Sager, the relentlessly positive NBA sideline reporter, has died at the age of 65. His toughness was iron strong, as he faced cancer and, incredibly, experienced that same cancer go into remission. Mr. Sager certainly had a memorable collection of high-profile interviews with basketball icons, but his legacy was built on something much more profound and meaningful.

His personality, decorated head-to-toe in spectacularly strange and overwhelmingly loud jackets and suits, was one defined by kindness. A rarity in this world, for sure. So many believe that we must be cool and removed, yet Mr. Sager is one example of how spreading happiness and trying to get people to smile (regardless of and because of their personal struggles and circumstances) is a gift that should be copied-and-pasted over and over…and over again.

One of the great misconceptions about people who appear happy all the time is that there isn’t a darkness or broken element in their life or that they don’t understand the grit of the world. In other words, that they aren’t “real.” Actually, it’s precisely the opposite. If you meet someone beyond the age of 10 who makes it their purpose to be happy, it usually means they have or are enduring deep struggles, but choose to be joyful and bright and bring out happiness in others.

Choosing to be happy instead of aloof and indifferent?

That sounds pretty damn real to me (in more ways than one).

Even just one smile can make all the difference…to somebody.

“Wait, what was wrong?” was probably bouncing around the head of Orson Welles nearly 78 years ago.

Wednesday is a great day to wonder. For instance, did Orson Welles invent the viral video (technically, viral broadcasting)?

The radio broadcast “War of the Worlds” (adapted from author H.G. Wells) caused an uproar with the American public on the evening of October 30, 1938 because of the realism conveyed through the audible airwaves. In 2016, the equivalent would be staging and enacting a fake global war on TV with vivid, realistic detail and unimaginable consequence and panic. The hysteria generated by the “War of the Worlds” broadcast is still widely viewed today with incomparable impact.

Question: Have you seen Orson Welles respond to journalists following “War of the Worlds”?

Jimmy’s Daily Planet has the scoop from that famous Sunday night broadcast.

Actually, Rosebud has no relevance here. This blog post is about Orson Welles, so it felt right.

Reflecting on the power of mass communication, it makes one cogitate the possibility of a cinematic equivalence occurring in the modern era? With the instantaneous and cross-checking nature of social media and Google, could anything similar to the radio broadcast of “War of the Worlds” happen again? Even if unintentional?

Either way, as Frasier Crane would say, “I’m listening.”

In the early hours this morning, WDBJ reporter Alison Parker and photographer Adam Ward were shot and killed during their live broadcast in Moneta, Virginia. Absolutely horrific. As a former broadcast journalist, this devastating news sent chills down my spine. They were just out doing their jobs. There are no words.

Despite the fact the suspect’s name has been released and there is video of the murder, that footage will not be shown on this blog out of respect for the victims. And the name of the murderer will not be disclosed here because he is nothing but a hellish monster.

We need to remember the innocent victims: 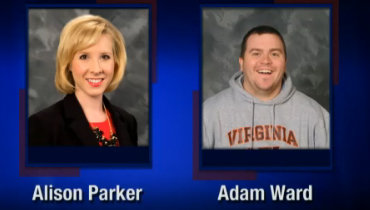 Prayers are with their loved ones.

These are two of the more popular attempts of pronouncing the name of my collegiate alma mater: Quinnipiac University (FYI-“QUINN-uh-pea-ack” in one smooth breath). My first visit to the university was in the middle of winter and it was so frigidly cold the temperature had to have frozen somewhere in the single digits. There was snow, but not the 40” avalanche that recently descended on the Hamden area. I loved it then and continue to love it today with nostalgia.

Speaking of which, I was a broadcast journalism major, focused in sports, and covered numerous sports teams during my four year residence, one of which was men’s ice hockey. This team was particularly exciting because it was the most popular sports team on campus and therefore created an incredibly electric atmosphere for each of their icy battles against the best of the Ivy League and others in the ECAC.

Memories are coming back of midweek player and coach interviews, game day dinners in the arena with my fellow press corps, recording the game for highlights, post-game interviews and the hours spent in the editing room in the School of Communications. These reports were not only for school projects and school television shows, but also for The Palestra online, for which I was a paid reporter/One Man Band. Good times indeed! If only I could be covering the team this season…

While there were some thrilling moments from my time as a student, those teams may have been more responsible for building the foundation for what is transpiring during the 2012/2013 season thus far with the same head coach at the helm, Rand Pecknold.

As declared today, February 11, 2013, the Quinnipiac University Men’s Hockey team has, for the first time in school history been ranked… 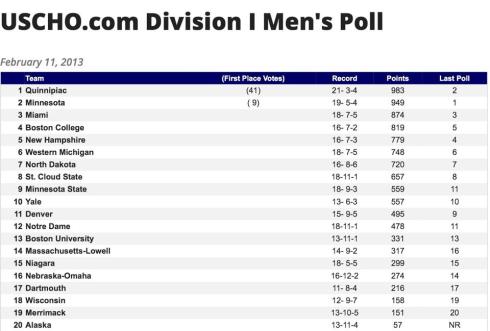 Quinnipiac is currently the #1 college hockey team in the country! For all of us alums, this is not only amazing, but also quite a bit surreal. To see them listed in the top spot atop the giants of college hockey from around the United States is truly a sight to witness.

Here is a quick statistical rundown:

To quote from a local Ohio favorite of mine, “With a name like Smucker’s, it has to be good®“. To my fellow Bobcats past and present, we all could substitute our beloved college into that phrase and it too would be a perfect fit.

For those who are studying and have graduated from this university, the word “Quinnipiac” signifies many things: Relaxing on the quad on a Saturday or Tuesday afternoon, studying in groups at the iconic Arnold Bernhard Library, ordering a mouthwatering bacon, egg and cheese sandwich from the cafeteria after an 8:00 a.m. science class, adventures in New Haven on Friday & Saturday nights (Toads!), socializing in the many dorms, dressing up in a pink skirt and a tight pink tank top and singing “Man, I Feel Like a Woman” in front of all the fraternities and sororities with two happy backup dancers (my picture made the yearbook!) and so on.