The United States Men’s National Team (USMNT) will not compete in next summer’s World Cup in Russia after losing away at lowly Trinidad and Tobago 2-1 last night. 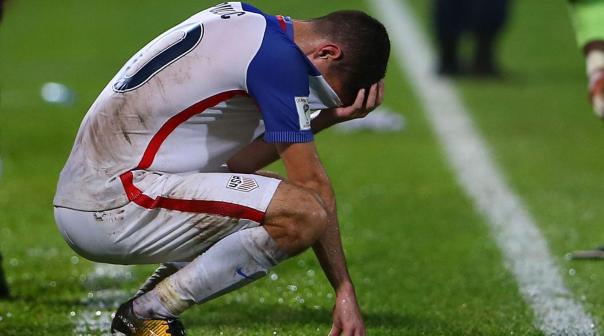 One of the blog posts I wrote a few months back concluded the hiring of Bruce Arena would be a 50/50 coin toss regarding success. Whether you picked heads or tails, it turned out to be the other one for Mr. Arena’s prowess for getting the United States to the 2018 World Cup. In truth, the coin didn’t land in someone’s hand, but rather in a gutter.

As written in yesterday’s blog, like the Dutch not qualifying for next year’s World Cup, the USMNT failing to qualify is equally a “total mess.” It’s embarrassing and humiliating. There’s no other way around that fact. Moreover, this blog has repeatedly (repeatedly) written about the shocking lack of change and insight concerning USMNT’s ineffective roster, strategy (the team had a strategy on the pitch?) or any overarching philosophical guiding principles whatsoever for America’s national team. And these critiques aren’t limited to this year or a match-by-match basis, but for several World Cup cycles.

There are so many negative things that can be stated right now. Actually, there are far too many negative things that should be stated right now about the USMNT. That’s a problem in and of itself. One plus today, however, may be that the current roster, not including Christian Pulisic and possibly Bobby Wood, are likely done at the national team level. These older and familiar players were given too many World Cup cycles, especially because their way didn’t deliver expected results. The next generation of Americans, like Christian Pulisic, Julian Green, Mix Diskerud, Wil Trapp, Bobby Wood, Josh Williams and others, need their shot to define the USMNT with a dynamic playing style guided by an identifiable, innovative philosophy.

A new coach from overseas with a proven record with young players wouldn’t hurt. If US Soccer is thinking clearly (a big if), they might focus their attention and wallets on Mr. Pep Guardiola. Once again, it’s possible and also the best bet for simulating a Men in Black flash eraser moment for American soccer fans. All the above problems would be resolved and the USMNT could enter a future World Cup with talent and expectations like never before. If there was ever a moment to show someone the money Jerry Maguire-style, this is it.

The USMNT is (and has been) in desperate need of a soccer revolution. When you think revolution, you think of standing for and protecting your home; the values that define you and showcase your best characteristics for a bright, prosperous future. In the case of US Soccer, that means returning home:

In Columbus, US Soccer will find a future waiting and willing to be built together by dedicated blue collar workers from a plan by white collar visionaries and supported by the best damn fans in the stands. Quite frankly, it all sounds like a massive idea.